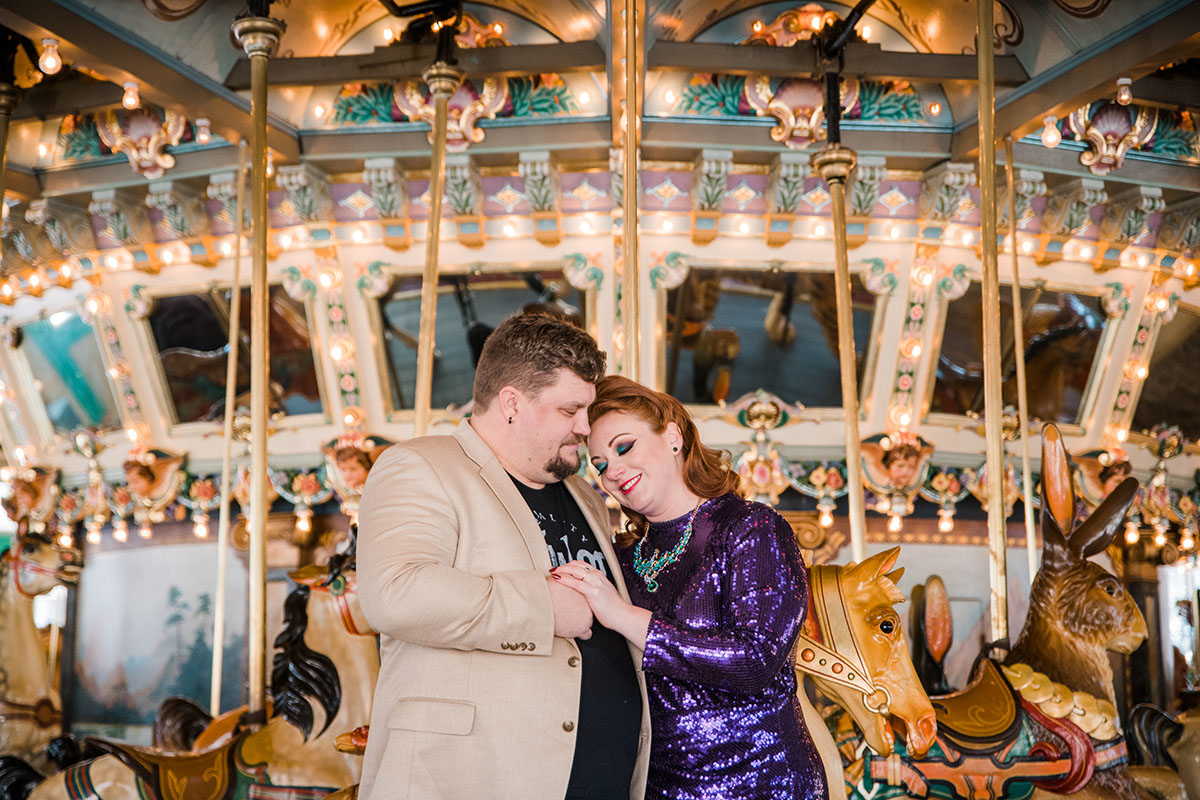 This fun, colorful engagement shoot is the creative product of some of Northern Virginia’s top wedding professionals. Bride Leigh Maltby is a wedding planner with All the Dainty Details, and had worked with Sarah Sta. Ana of Santa Ana Photography on several weddings. Her fiancee, Mitchell Norton, asked Sarah to photograph a surprise proposal, after which the couple chose her to be their wedding photographer. When Leigh asked Sarah if there was anyplace she’d been dying to shoot at, Sarah told her about Glen Echo Park. As soon as Leigh saw the carousel, she fell in love with the idea and the shoot quickly became a reality.

Leigh chose Best Face Artists for a one-of-a-kind hair and makeup look that she described as “40’s meets the 80’s.” Makeup artist Alena and hair stylist Leanne came through with a stunning look that perfectly complemented Leigh’s vibrant personality and love of color.

A freezing cold day didn’t stop Leigh and Mitchell from letting their personalities show through in these colorful, creative shots on the Glen Echo carousel.

Leigh’s styling expertise is evident in this amazing look that brings vintage carnival to colorful life.

Fun Fact: The carousel was originally installed in 1921 and is the park’s only remaining original ride.

A pair of sparkly blue shoes were the perfect touch.

Leigh and Mitchell pose in front of the carousel’s 1926 Wurlitzer organ – one of only two in existence.

Leigh and Mitchell even brought along their bulldog, Xeno.

It’s easy to see the appeal of Glen Echo Park as a backdrop for this shoot, with so many fun photo opps, such as this “Cuddle Up” sign. Cuddle Up was originally the name of the park’s tea cup ride, which has since been converted into a visitor pavilion.

Vendors for this Shoot: